The Russian Spetsnaz Alfa Group is a special operations group and covert agency of the Russian military under the direct command of General Vasili Doukov. They first appear in DC's United, where they intercepted members of the League in Bludhaven during a mission to capture narcoterrorist Ramiro Salandez and later joined in a operation with Delta Force and the NSR Special Purpose Team to liberate Metropolis from PMF occupation. 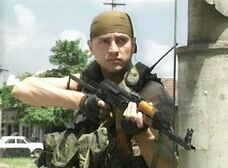 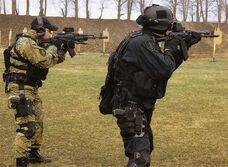 Spetsnaz Alfa operatives training.
Add a photo to this gallery
Retrieved from "https://dcnewgenerations.fandom.com/wiki/Spetsnaz_Alfa_Group?oldid=4227"
Community content is available under CC-BY-SA unless otherwise noted.