--Emiliano rousing support for his rebellion against President Saleno

The Militia Liberation and Resistance, also referred to as the Mercs by government private military companies , is a rebel faction led by Emiliano Torres that continues to fight against President Saleno's forces after the collpase of the military regime the year before. The Mercs are well-trained ruthless fighters that has no sympathies for enemies.

The Merc rebels are mostly former Mexican soldiers and hired mercenaries from Cuba. However, there are reports that Emiliano is recruiting foreign mercenaries from Africa and the Middle East. These African and Middle Eastern Mercs are mostly from countries with corrupt governments. So it only made sense for them to share in Emiliano's war against a regime he sees as corrupt. In return for their services, Emiliano promises these African and Middle Eastern recruits a "better world" once the war is won.

"These guys are ready to fight a war."

--Dante speaking about the rebel forces.

According to intel gathered by government private military comapanies, the Mercs are armed with more military-grade weapons, including advanced use in armor and air support. 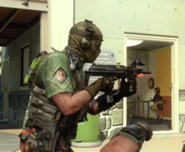 Add a photo to this gallery
Retrieved from "https://dcnewgenerations.fandom.com/wiki/Militia_Liberation_and_Resistance?oldid=4048"
Community content is available under CC-BY-SA unless otherwise noted.